You know those Ancestry.com ads that encourage you to follow the leaf? The stories in the commercials are often uplifting or silly. A woman discovers her grandmother helped free slaves in the Civil War. A man finds out his family was full of barbers.

Forget that – I went to Belgium to find my family roots.

They never show you an ancestry.com ad where a person looks into the camera and says, “It turns out, my family disappeared at some point and there are no records of them anywhere and all the ‘research’ done by an extended family member seems dubious.”

To take it further – I don’t know if anyone found their old family address, only to find that there is no house at that number – just a storage shed and an empty lot.

No wonder my family left for America.

I should backtrack. After spending the morning absorbing as many Brussel’s sights as I could in the immediate area around the train station/ hotel (more on that on another post), I traveled to the city of Charleroi. I had done a little research before hand – a coal town before the war, Charleroi was a working class, blue collar sort of town. I had my maps to the address on the research . Both of them – it turns out there was a left and right bank version of the street, so I decided I’d hoof it to both. 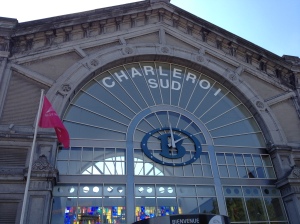 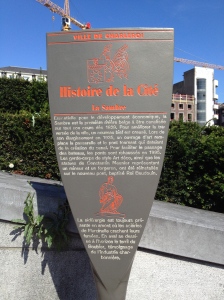 I did not get my hopes up too high. Upon arrival I was pleasantly surprised by the cleanliness of the new train station and the history plaque of the town. But walking revealed exactly what I expected – a roughness around the edges. It makes sense – my Belgian people were machinists and coal miners. Still, as I walked by small chalets, I couldn’t help but speculate.

What if my address led to a chalet of sorts? 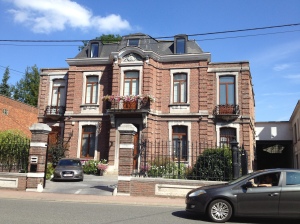 What if my address led to a house with a fun, artistic exterior? 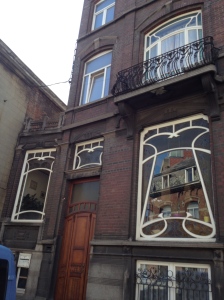 What if my address led to an outdated, functional space? 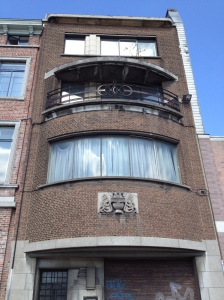 Turns out, there is no answer to this great musing. Because my address did not exist anymore. What is one to feel when, upon trekking across the world to the ancestral homeland, one finds that the lot has been turned into storage?

Turns out, not much. I walked the street from one end to the other, past the Greek restaurant, up to the small plaza and locked up church. I verified the street with a nice woman who was leery of a stranger. I walked back and forth, up and down the block, double checking street signs and numbers. 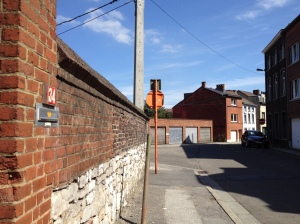 No wonder my ancestors left – we were living in a garage.

But no, I was not done yet. There was, according to my research, a second Rue de la Regance in Charleroi, on the other side of the river. And so I started trekking again. Finding the center of Charleroi involved a healthy uphill climb through a far more commercial area, past shops and many a bar and café. Eventually I came to the center of the town, with its own Hotel de Ville and Cathedral. It was solid, but old and not quite beautiful. I don’t wish to sound mean, but the workaday is not a tourist attraction.

Up another street, another Rue, and through construction and Halal markets, love hotels and abandoned restaurants. This whole experience is not reaching rewarding levels I think, as I find the general region of where my family’s house should be. There’s a gutted three story brick front. At least I think that’s my house – there are no numbers on any of the buildings, save for a “40” a few houses up. 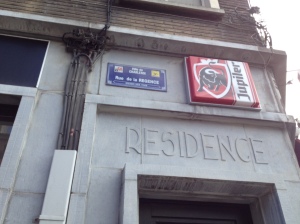 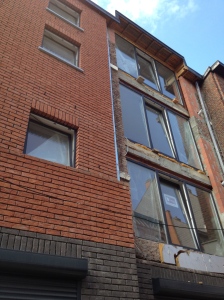 Thus did my adventure end with a whimper. I trudged back down the hill, sort of taking in the sights.

Not all adventures end in epic moments, or even connections. I knew that I would not find family living in those apartments. We immigrated. We left. Even my extended ancestors left Charleroi. That is not what I was looking for.

I wanted to see where I came from, to see in person where my roots started – or as close as possible. I know that I have no royal blood in my line. I know that in my more recent family history, the Belgian side of my family shunned my Grandma Bert because she was Croatian, and they thought her beneath my grandpa (who died when my father was a baby). I guess I wanted to see where they came from.

Perhaps I should have stuck to chasing leaves…

So it was that I headed back to the train station to wait for my train. I stopped at the bar and got a beer. A construction worker bought me a beer as well. He was an older man who spoke no English. I told him I would be happy to practice my French, and we sat down. He told me of his daughter, who left Charleroi to be a teacher. He was so proud of her.

The drunk woman on the other side of the bar – who I was convinced was actually a pickpocket – sidled up and started complementing my French. She switched in and out of English with her son, who looked equal parts embarrassed and engaged. She slurred her words and offered to buy me drinks. She said Hillary “deserved to win because she was a woman.” I did not point out the problems with that idea. She thanked America for helping during the war. Given France and the US’s differing stance on the current conflicts, I assume she was talking about World War II.

I had to leave to catch my train. Turns out, the bar clock was slow. I missed my train by two minutes, and had to wait an hour and a half for the next train.

And so I am here. Stuck in Charleroi, the home of my ancestors. I can drink no more beer for my wit’s sake. I will be late for the party tonight. And I will be stuck in the transfer station for another hour too.