It’s been a long break, and I have a whole list of topics which require attention. So let’s get to it!

Looking for an enjoyable hike outside of Tokyo? You should try Nokogiriyama!

First of all, you get to take a ferry. It’s a bit of a walk from Keikyu-Kurihama or Kurihama station, so I recommend taking the bus from the train station to the ferry dock. The ferry leaves roughly every hour, and costs around 750yen. I’ll explain why later in this post, but I thought the ferry ride was perhaps the best part of the trip. First of all, the seahawks follow the ferry because people throw food to them. They dive in and out between the seagulls, and it is quite a show. Additionally, you can see Mt. Fuji in the distance as you cross the bay (provided it’s a clear day). You can also go around the bay via train from Tokyo.

Mt. Nokogiriyama is home to the largest stone Buddha statue in Japan, which is why I decided to go. The weather was great, so I made my only mistake of the trip – I walked to the south entrance of the temple from the ferry port. The maps of the area are misleading, and you need to know this. There is no safe path to the mountain trail from the ferry port if you head south. You can take the cable car easily enough from the ferry – there are plenty of signs. Fool that I was, I wanted the “full” experience and decided to walk.

I wound up going through some frightening highway tunnels. These tunnels have no pedestrian space – you have to walk along the shoulder, on a curving road. I was genuinely uncomfortable around several corners, as big trucks would go roaring by and I only had a couple of feet to work with. In between the tunnels, there were some beautiful ocean overlooks and a couple tiny roadside shrines. I would not recommend walking to the back/base of the mountain if you have children, strollers, or anything bulky. Either take the ropeway up, or take the train from Hama-Kanaya (again in the Ferry town/Kanaya) to Hota. It might be a slightly longer walk from Hota, but it will save you some clenched cheeks.

After the tunnels, I found the road leading up to the path towards the temple. There was no one on the path (probably because they were all on the safe side of the mountain), which made for a pretty hike up to the entrance. At the back entrance, there was a solitary woman working in a garden, who came up to me as I wandered through the gate. I paid my fee (600yen), and got to exploring.

From the “southern” entrance, the first few photo stops include some pretty traditional temple buildings, including a beautiful wooden structure. Then comes the large Daibutsu. It was pretty warm that day, and the Buddha is out in the sun, so I did not linger. I lit my incense, said my prayers, and moved upwards. Of note: if you are looking for traditional Jizu/Buddha figurines, there is a sort of shrine where people stack the little figures by the hundreds. You can buy them at the temple shop nearby (it’s also where you light the incense). 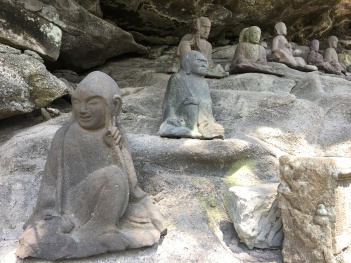 Nokogiriyama is all stairs, so be advised. There are very few inclined spaces – it’s primarily stairs. So if you dislike stairs…well, this is not your day my friend. I realized this around the two-third’s point, as I was passing through the alcoves of preserved Buddhas on the way up to the “Hell view” (Jigoku Nozoki). It was tiring – I like hiking when there is a variety of inclines. I imagine that it would also be a difficult climb if you were in a wheelchair or needed assistance. I passed elderly couples huffing and puffing, and gazelle-like children who were literally jumping up and down the flights of steps up to Jigoku Nozoki.

The overlook is a sheer face down, and this is not a natural occurrence. This mountain was a stone quarry for a time, and so you can see the tidy work of the stonecutters. I liked it, and I asked a stranger to take my picture. This is where being in Japan works to one’s advantage – I left a stranger with my smartphone for quite a while as I walked down one viewing station to the overlook itself, which is a separate point. It’s a beautiful view. You can see all the way down to Hota, across the bay to Kurihama. It had grown hazy in the afternoon, so Mt. Fuji and Tokyo had disappeared, but I could see the Yokohama Bay bridge in the distance. 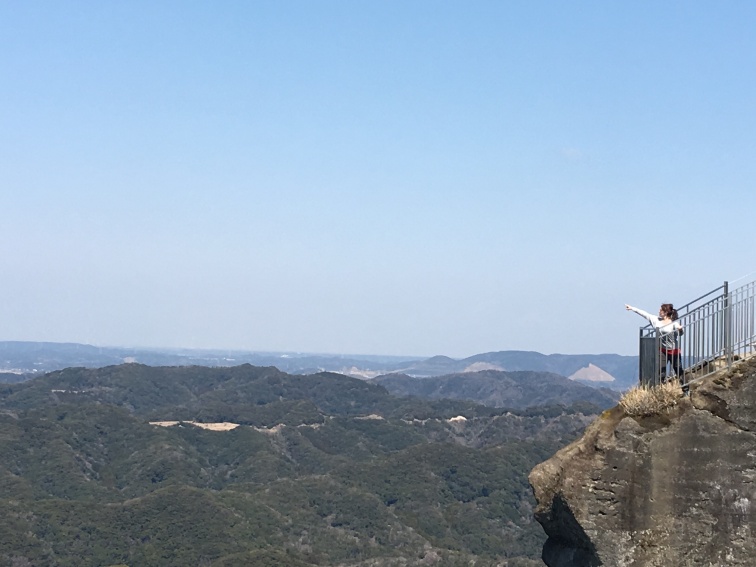 Nokogiriyama is a good beginner climb, as it tops out at just under 400m (1200ft). I congratulated myself on climbing all the way up, so I took the fast, efficient, and only mildly unnerving cable car down. It took me about an hour and some change to make it around the mountain to the south entrance, and so by the time I got to the top it occurred to me that I would have saved a great deal of time if I had just been lazy and spent the money on the cable car.

The fishing village was still a bit closed (the season hadn’t officially kicked off), but there were several pleasant tourist shops selling fish and pickled vegetables, not to mention stuffed oranges as mascots. I wandered around the largest shop for awhile, waiting for the return ferry.

I took the ferry back, and again I thought it was a true highlight of the trip. It’s forty-five minutes of comfortable travel. I like water traveling, so I loved the pleasant rocking as we crossed the bay. There are fishing boats, large tankers. I even saw a submarine!  And I found I enjoyed the trip as much as the climb because it was something both exciting and calming. Unlike traveling by train, the ferry doesn’t stop and the whole of the trip is out of my control. All I need to do is sit/stand and enjoy being on a tiny bit of the ocean. I opted to sit in the cooled inner cabin and write in my journal on the trip back, having acted like a child watching the hawks on the journey to the mountain.

If you are are in need of an easy escape, Nokogiriyama is a great option. Want to know more? Here are some separate pages of information! Final information – take the bus from the port to the train station.  Go, and enjoy!