NOTE: This post never got published – WordPress accidentally sent it to drafts. This post is from the beginning of September, and I only just realized it now. This means that references to this post in those earlier posts would not have made any sense. I’m not sure I’m making sense now….Anyway, on to my small initial breakdown!

To be fair, I really did hit all the buttons on the remote.

I tried every one, both with the cable plugged into the television, and with it removed. I moved the tv to a different outlet, just in case. And I fiddled with the back, checking the input options. I know televisions, and this one wasn’t turning on. I don’t mean I was getting static, or a black menu screen. I mean that the power light didn’t even turn on.

So I called the main office. I assured them I checked the circuit breakers. Within twenty minutes my…landlord (perhaps) showed up. I showed him the errant television, now unplugged in the corner. He plugged in the very same cables I did. He hit the same buttons I did on the remote. And the television turned on.

I stood dumbfounded, staring at the screen. He stared at me with what might have been pity. I apologized in English, which I’m not sure he understood. Then I escorted him out, and had a little cry. Nothing major, just a small, “Oh, I’ve been in this country two days on my own and I’ve already made a total ass of myself. I’ve brought shame to the whole of the United States. Stupid television. Stupid buttons. Stupid American.” Three minutes later, sniffling, I cleaned off my face and stood in my room. It didn’t do me much good.

This is my room (the jinxed television is offscreen to my left): 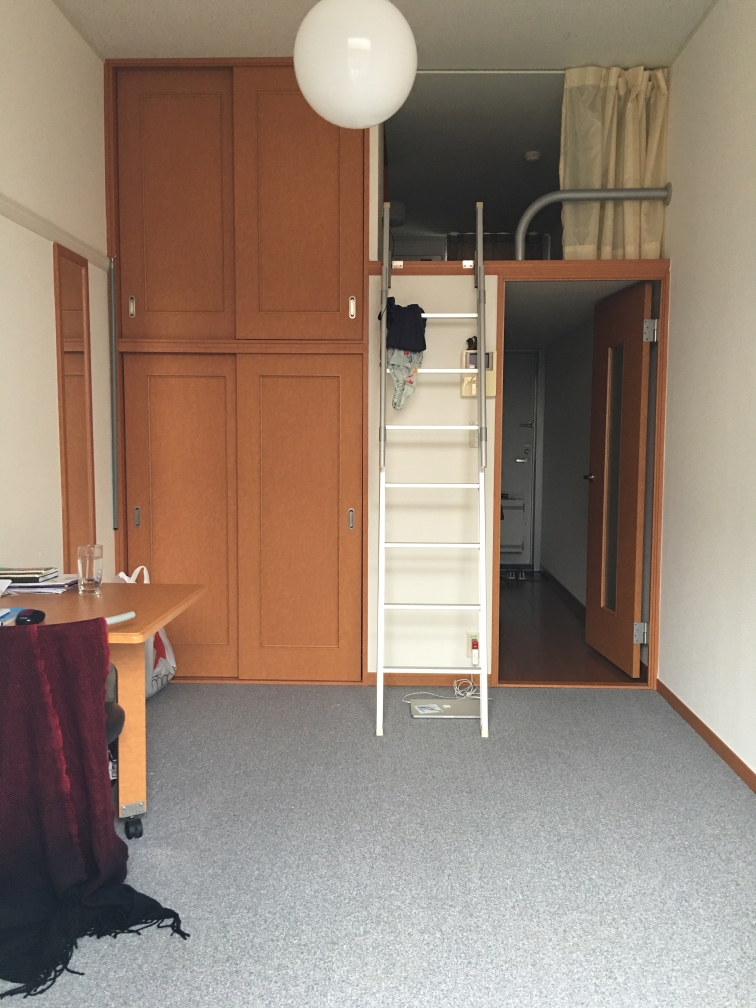 It’s just as cozy and unfurnished as can be. I did get a futon and duvet, which I moved to the “loft” space on day 2. Admittedly I love the loft space, even if the air conditioner doesn’t quite reach it. My pillow might be filled with corn kernels, or dried beans; I haven’t investigated, but it doesn’t cradle my head so much as rebel against it. Right now I’m trying to figure out where I’m supposed to store anything. I have two small closets for clothes, as well as two small closets that I can’t really access without the aid of a provided hook/pole (you can see it by the mirror). I have two small cubby-holes above my microwave/fridge, and one small cabinet above my sink. I have space under my sink, but I won’t be storing food there. I have a good sized shelf in the bathroom, and a large cubby in the loft space (where I put my books and crafty things).

I think that’s what fueled my little crying fit. This is such a stark space. It really makes an impression. I have one table that is to serve as my desk, dining room table, and kitchen prep area. My walls are white and bare. I have no bookcase, no dresser, no oven. I can sit on my floor, or on one of the two hard chairs provided.

I wonder if that’s why they recommended bringing money with us as a cushion before we get paid – so we could buy furnishings. I won’t, as I don’t have the money to do so. But a couch would make this place infinitely better. Hell, a beanbag would at least give it the semblance of a residence.  It’s not the size that bugs me. I’ve lived in small spaces and made them cozy and my own. And I know that Japanese spaces are small in general. If I had to define it, I think it’s just the blankness, and the unfamiliarity. I realize this as I lay on my back on the floor, staring at nothing.

But it’s only been two days, I remind myself. It’s been two days. I’m being unduly hard on both myself and the residence. At least I know that it’s my pattern to do so. I break hard with first impressions, usually skewing towards negative. And then I take a deep breath and make it my own space, my own environment.

One of the rules here is that I’m not to affix anything to the walls via pushpins, tape, nails, etc. So lawyer-trained as I am, I’m putting things up with sticky-tac because it doesn’t stain or leave a mark. I refuse to spend the next five months living in a bare white room.

One step at a time, I shall give my tiny rebel yell. I will make this place my home. I will master the television.