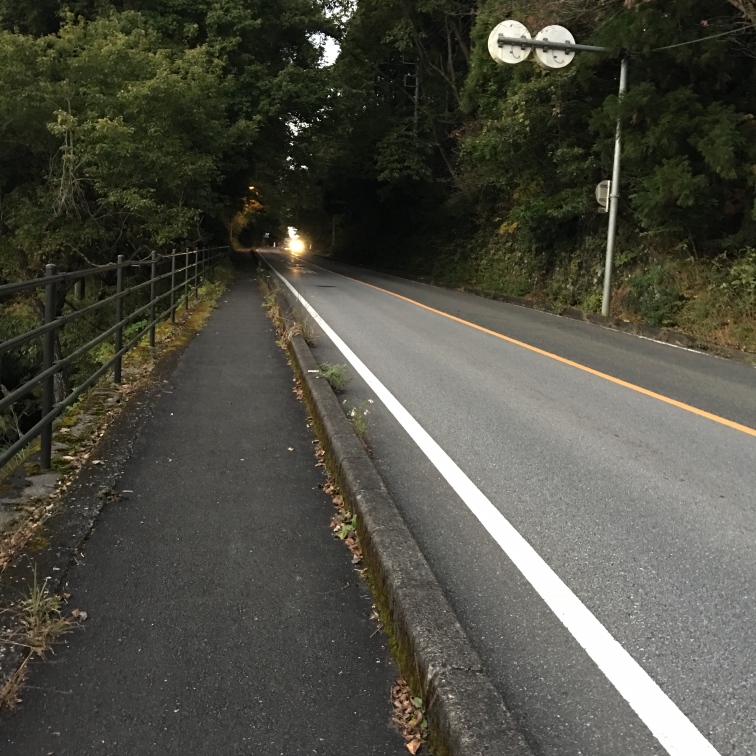 This photo is from my second day in Nikko, when it was still light. I’m uploading from my first night as opposed to my first day, because this story overshadowed my afternoon. And because it was so dark, I have no photos to accompany it, save for this one I took later in my journey.

What my host failed to mention in any of our correspondence is that however many kilometers it is from the Tobu Nikko train station to his rental, 95% of the journey was uphill. Nikko is a mountain town, but I passed my afternoon on a relatively gentle slope, and the town itself seemed more in the basin than on the inclines.

Not so my accommodation, I realized. I passed the rental one of my fellow teachers recommended (sold out), and kept climbing. I passed the rental that I had cancelled (too many negative reviews), and kept climbing. I ran out of sidewalk, and light. I passed inn after inn, pausing for a moment at each opportunity to stand in a light source and check my photo map. And I kept climbing. I had not stretched or prepped in any way for such exercise. My legs eventually stopped feeling the good kind of tired. I could feel it in my quads – 2 miles uphill was a lot to ask after a day of hiking. They are going to hurt tomorrow.

In the darkness, I could still see the occasional silhouettes of the tall trees around me. It made for a moody walk, and I couldn’t stop thinking about the poisonous spiders, leeches, and other dangerous things that I had recently read live in Japan. I tried not to get too close to the trees and bushes, while also not wandering into the road. And then there was the rain, which I had not minded until I was going solidly uphill in the dark with my poncho draped over my bags to keep them dry. By the by – my poncho is my hero, but also the dumbest inanimate thing. It kept sliding to one side, or getting caught under the front wheel without actually draping over the bag itself. Ugh.

Anger kept me going after the halfway point. I was pissed off that there had been no mention of climbing a mountain in the description of the property, nor in the reviews. A pleasant place, the reviews had said. Beautiful location, the reviews had said. I drafted my own Airbnb review, scathing and full of really beautiful but negative vocabulary. I started wishing horrible things upon the owner for his omissions. Eventually, I lost the anger, and I could feel real fatigue eating at my edges. The closer I got to where I thought I was going, the more I felt like I was going to turn into a blubbering mess from sheer exhaustion. Why had I been so stupid as to hike all day and then go to my lodgings? Why had I not planned better for this?

I passed the house altogether at first because the rain hid the faint Christmas lights. I mistook my rental house for another. Luckily, the second house had a loud, sturdy akita who let me know that I was mistaken. As I tried to leave the stairs, an old man came out to the balcony and asked me something in Japanese – my Japanese is still so weak that I mostly guessed at what he could be asking. I must have cut a pretty pathetic figure – my rain poncho was ineffectively tied around my bags, I was wet, my legs were a little trembly, and I spoke atrocious Japanese.

“Pension?” he asks.
“Airbnb,” I reply, but I recognize the word. For some reason it’s on almost all the hotels I’ve seen thus far. They really like using French here apparently. He disappears and his wife (I assume) comes out. She looks at my phone, and the pair start arguing about the address. In desperation, I turn on my phone’s cellular service. I will pay the (probable) $20 in extra fees for one minute of functioning google translate and a working map.

“Is that address near here?” I put into the phone.
“Ok,” the woman says after reading the translation, and takes off walking in the rain. She is still in her house slippers, and the old man follows. I try to stop them, but I don’t have the words, and when I show the man my google translate for “You don’t have to walk with me, sir. Just point.” He nods and keeps walking.

So there we are, one wet, confused American in a red knit hat, and an old Japanese couple dressed like my great uncle Tom and aunt Dorothy (bless them), each under an umbrella. They get me to the gate of my rental around the block, and I bow as low as I possibly can. I can’t tell, but I bet they were relieved I knew the place. We all reached near epic levels of confusion.

They’re going to be even more confused tomorrow when there’s a bouquet of flowers waiting for them. I passed a florist earlier today, and I’ve been wanting to get flowers for someone lately.

Soaking in the tub, drinking very hot ginger tea, I can feel all my swear words dissipate. I was about ready to quit the whole trip, suck up the financial loss and pay to stay at one of the faux “Euro-style” inns I passed somewhere on the unending incline. The sort that charges hundreds of dollars a night. And I know I’ll be peeved in the morning, as there are no combini around here, and I don’t have wifi so I can’t just go online and do some research. But right now, in my comfortable and warming up rental, I’m simply happy to not be climbing anymore. Tomorrow, I know I’ll get a taxi up here, and walking downhill is going to be so much easier.

Good thing too, as I’m planning to hike up the neighboring mountain…

MVPs of the day:

– My red knit hat: I bought it 50% off at a 300 yen shop this morning because it was unexpectedly nippy. It kept my head nice and warm, and though I was only dry because of the umbrella, the hat made me feel quite comfortable.
– My flashlight: An LED light from my True Dungeon volunteering, this little guy was a light for me when all other lights went out (yeah, it’s my Elendril light)
– My legs. God bless my legs, and forgive me for not stretching them. May they not tense up too much overnight. They did such a good job getting 3k up an unplanned mountain.